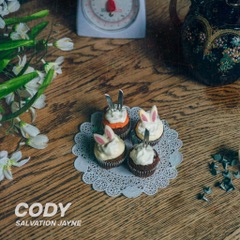 ‘Cody’ is the brilliant new single from UK Alt-rock band Salvation Jayne. As with the previous single, Violent Silence, it’s taken from the forthcoming debut album, out early 2022.
‘Cody’ once again showcases the bands incredible musicianship behind the soaring vocals of Chess Smith. The track further cements the band’s growing reputation of serious competitors to the crowns of Paramore and Yonaka.

Previous single ‘Violent Silence’ has received some great radio and press internationally with tastemaker support from the likes of This Feeling ‘Track of the Day’, legendary DJ Rodney of the Rock on SirusXM in the US, Abbie McCarthy BBC Introducing, Planet Rock radio etc

‘Cody’ – live performance video at The Strongroom in London –
Having exploded onto the UK music scene, Salvation Jayne have carved themselves a reputation for their white-hot, hook-laden explosive fuzzy riffs, glossy dream pop undertones, and captivating atmospherics. The bands self-released singles have received support from the likes of BBC Introducing, Kerrang Radio, Radio X, Amazing Radio and dozens more stations in the UK and internationally. After relentlessly touring around the UK, Salvation Jayne now have several sold out headlining shows under their belts, adding to a large number of past support slots with bands including The Subways, Milk Teeth, Saint Agnes and Rews. As a forward-thinking alt-rock band they have made a name for themselves on the UK scene due to their charisma and energetic live performances.

The band are currently half way through a 12 date UK tour to promote the release.

Al Balfour Geiner
2021-09-30
Previous Post: Silicon Beach Film Festival ..4 October
Next Post: Jeremy Parsons Continues Momentum With “Something Other Than You Are”