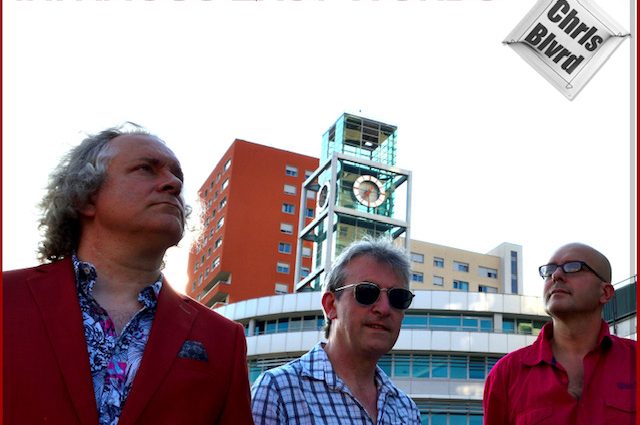 Charles Boulevard are three musicians from Prague, Czech Republic and Dublin, Ireland. The line up consists of Pavel Holada Lead Vocals, Guitars and Bass. Berny PB Drums/Percussion/Vocals and Dermot Condron Guitar/Vocals. Dermot from Dublin met Pavel and Berny P.B. (whose band was a part of the Czech club scene) while working in Prague and after a long friendship and several musical collaborations they have joined forces to create their showpiece with Charles Boulevard. Charles write their own music and all three members contribute to the song writing. The fact that they come from different cultures and musical backgrounds has enriched their sound and they have succeeded in weaving together an intriguing tapestry of musical styles.  United in their affection for that golden era vintage rock sound the band have put their own identity on the music to create something truly fresh and original.

How did you get involved in music?

For us it was really simple. We found our first band as kids. We always wanted to play. And we wrote our music right from the beginning.

When did you make music a priority?

It has always been a priority in our minds. But sometimes you must do some other things to survive. I remember once I tried to stop playing at all. I found it impossible. Music is part of our lives.

What inspires you daily to write & record music?

When I was beginning, I asked one writer where does he find inspiration. He answered with the most obvious quote. Just look around. Keep your eyes open. I didn’t get it back then, but I understand it now. The inspiration is everywhere. And I found that the music comes by itself.

We just have to follow. In fact, we don’t write music, we just let it come through us.

What’s unique about your music.. What sets it apart?

We try to be very true. We don’t pretend anything, we do not follow trends. And we love to bring back some great sounds of yesterdays and make them cool for tomorrow.

What’s your favourite and least favourite part about being a musician?

Favourite: making music – on stage or in the studio. Least favourite: packing after a concert.

Name 1-2 highly influential musicians that you listen to & respect?

We love the way Tom Petty was making music. Or Bruce Springsteen. The chemistry in the bands of these two guys is / was amazing. And there are lots of The Beatles or Led Zeppelin influences. We are some kind of rock’n’roll traditionalists!

When it comes to how the music enthusiast listens to your album do you prefer they buy or stream and why?

This is very personal. We are happy when our music is heard. Streaming, downloading, buying CD or whatever, – this is not so important as long as the music gets played. I personally like to buy CDs. It is so nice to have the product in my hands.